Well--Its official! Georgia now ranks FIRST in the United States amongst film production, trailing closely behind is the U.K. at number 2, then Canada, Los Angeles and New York City. Since a tax credit was signed into law for Georgia in 2008 the film industry has been on fire in Georgia. With the construction of the gigantic Pinewood Studios in Fayetteville ushering in the majority of the current Marvel film work and the fully grown urban landscape of Atlanta, it has been a hotbed for movie and television productions. This boom has created a whole industry that now views Atlanta as a major city and not just used for stories about “the country” and “rednecks”....(ah hem) --I’m looking at you Deliverance. Here are some great film locations you can check out now--and you better believe there is plenty more being filmed as i write this!

This tiny little park in the dead center of what was once called Five Points of Atlanta is completely surrounded by tall buildings making it an easy look alike for New York City as it did in Anchorman 2. The hilarious fight scene between all the different anchors from all the different networks was filmed right in Woodruff Park as well as  “Rule number 2”  from the epic horror comedy Zombieland. The Change Up, starring Ryan Reynolds and Jason Bateman, features an important scene as the actors make a wish while urinating into the fountain at Woodruff park wishing for each others wife starting a “Freaky Friday” type story where the two characters switch bodies. The television show Black Lightning is shot is The Muse’s apartments overlooking Woodruff Park as well as using a Smoothie King in that same area. Check out the park and enjoy recognizing the sites of some of these well known movies.

This building, by nature of being an art exhibit in itself, is one of the most unique examples of modern architecture. The large white structure commands attention with its odd cut roof line and interesting angles, it’s not hard to imagine this as a great place to film. This building was most notably used in the recent Marvel blockbuster release Black Panther. Transformed into the “Museum of Great Britain” with a little bit of CGI the outside can still definitely be recognized by anyone who has ever visited The High. Notably a giant glass dome was also added in post production altering its original roofline for this film. The scene inside where Ulysses Klau and Erik Killmonger steal the vibranium is all clearly shot inside the High as well.

Back in 1986 the High museum was transformed into The Chesapeake State Hospital for the Criminally Insane for the suspense thriller Manhunter which spawned the Hannibal Lecktor character of later Silence of the Lambs fame. Adaptation of the best selling book What To Expect When You're Expecting was filmed at the High Museum and many other places in town.

Built in the early 1900’s, the Gulch is one of the most massive concrete structures in downtown Atlanta. The Gulch itself is at ground level but massive roadways are built above with enough room for multiple railroad lines below and was built to allow downtown traffic to flow without interruption of train crossings.

As of current, The Gulch is the most used location on Atlanta where some of the biggest movies of the recent years have been filmed. The major battle scene In Captain America: Civil War, set in the Nigerian city of Lagos was all shot in the Gulch. The Walking Dead has shot many things in this area and used the Gulch in parts of the eighth season. The rapelling scenes In The Hunger Games: Mockingjay pt.1 were shot here as well as many car chase scenes in Baby Driver. Other major films like Jumanji:Welcome To The Jungle and Triple 9 have used this urban landscape as their set. Even television programming and Netflix have used the Gulch to film in with shows like The Gifted and Stranger Things. One of the most multi use locations the Gulch is also used for large tailgating type of sports events for The Mercedes Benz Stadium. Definitely an Atlanta icon for many reasons- this is a must see for film lovers of all kinds.

This area has the longest running history to be used for filming in Atlanta. Although the film boom has been in the last ten years, this area was used as far back as 1990. The warehouse district of Castleberry Hills was the setting for many post apocalyptic type movies like Freejack and Kalifornia. Most notably the film Driving Miss Daisy used this area for the setting of Dan Aykroyd's characters office, this film went on to earn an Academy Award and is considered to be a film classic.

As the film boom in Atlanta has been taking off lately other major films like Taken 3 and Ride Along have been shot here. There is a scene where The Rock walks through Castleberry Area in Jumanji and there is also a scene shot in the Mexican Cantina “No Mas” for Dumb and Dumber To. Melissa Mccarthy delivers some super funny stuff in The Boss also filmed in this area. There are many walking tours of the Castleberry Hills area and should not be missed!

Once a common row of intown living type spaces, this strip of Mitchell Street has become more industrial and retail oriented. With this area now more commercial than it was residential-the architecture still looks like a living space but a lot of it is abandoned and perfect for film crews to set up and use without disturbing residents per say. Spiderman: Homecoming used this as a setting for Peter Parker’s neighborhood as well at creating the Prachya Thai restaurant when Aunt May takes Peter out for dinner. In the scene from Black Panther where Klau is being interrogated and Nakia watches as suspicious van in front of this CIA black site safe house was all filmed on Mitchell street. On Mitchell Street,southwest between Ted Turner and Forsyth street, Rick and Glenn fight off a horde of zombies in order to make it to the truck in episode 02 of season 1,  “Guts” from the Walking Dead. Other major productions like Furious 7, Superfly, and MacGyver were also shot in this area.  Interestingly enough this area also was home to an amazing nightclub called The Royal Peacock where many famous R&B acts like such as Aretha Franklin, Marvin Gaye, Ray Charles and Nat King Cole were known to have graced the stage.

Agnes Scott in Decatur is a private women's liberal college that was built in 1889. In 2007 it was listed in Princeton’s Review of  The Best 361 Colleges as number 4 of the ‘Most Beautiful Campus” in the United States. With its old school collegiate type of architecture this campus has always had a universal “college” feel to it. It was transformed into the fictional location set in Ohio called Windsor College for the horror franchises Scream 2, is where Neve Campbell’s character Sidney Prescott went to school. The Blind Side, a story about a homeless boy who fulfills his dream to become a college football player was shot on the fields here. Scenes from the ever famous Fried Green Tomatoes movie were shot here along with Driving Miss Daisy making this location a fixture from the success of these major films.

The history on this location is unique and twisted just like the show that is filmed here. This building was once a state run and operated mental health institute and since its construction in the 1960’s its face hasn't changed much. After the mental health facility shut down, Emory University bought this building along with the campus and the Briarcliff Mansion. This original land area was once owned by Asa Candler Jr., whose father was the founder of Coca-Cola,and was in the briarcliff mansion he lived for many years. This structure fondly named “Building A” was originally planned to be used as clinical medical study space but with the age of the building and outdated services the building was relegated to being sort of a storage space- if you will. This however provides a perfect backdrop for some creepy type scenery that works perfect as The Hawkins Laboratory  in Stranger Things on Netflix. This show has created quite a huge cult like following and looks to be staying around for many seasons to come.

The Hunger Games has been one of the most successful movie franchises to ever grace the silver screen. With a huge amount of all three films being filmed in Atlanta, it has many locations to visit by its own group of superfans. President Snow’s mansion is probably the most iconic to this franchise. This mansion, named the Swan House, built  in 1928 at the end of the Jazz Age, it was lucky to be constructed months before the great depression. Originally the home of Mr. and Mrs. Edward and Emily Inman the house was built for entertaining and continues to do so today.

Also being used The Hunger Games: Catching Fire this prominent Atlanta with a unique shape was used as the Victor's Capital Housing. Before the quarter quell, the victors are moved to the capital. The inside of this massive hotel has very modern constructions style and has a futurist feel despite being built in 1985. It the elevator scene- passing oddly shaped multiple floors Johanna Mason strips in the clear elevators ascending to the victors quarters. This hotel was also used in the movie Flight starring Denzel Washington where in the scene where Whip Whitaker gets drunk in his hotel the night before his hearing. This structure alone from the movies filmed here is well worth seeing in person! 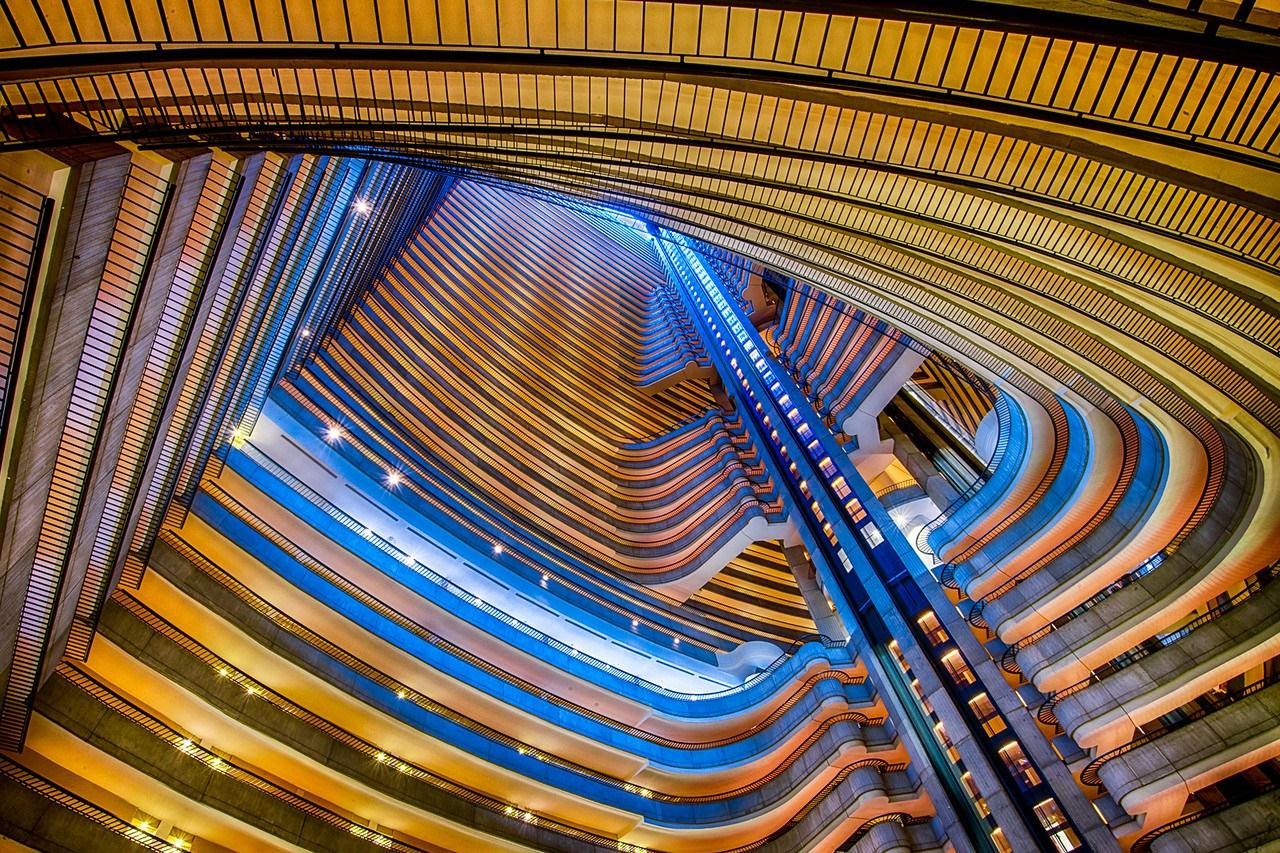 These are just a few of the many and ever growing film locations that are covering the entire state of Georgia. With 37 major films and television productions set to film in Georgia in 2019, you better believe that each will supply a multitude of new and interesting locations all around the state. Make sure to see these spots in Atlanta, around the state and continue to stay abreast of this -- the number one filming location in the world!

Have An Idea For a